In many respects the connection we have with our ancestors become more distant by the day. The human world moves on rapidly with technology at the forefront.  The gap between how we live our everyday lives and how previous generations did is ever widening.

The arts have always allowed us a glimpse into the past. Poems, art and music enable us to see how it might have been to live in a different time.

A less esoteric and explored historical reference is the food and dishes of generations gone by. We all have some understanding of food and most of us have our own opinions on it.

Here are some menus from events in history, which I think can bring you close to those involved in these events. 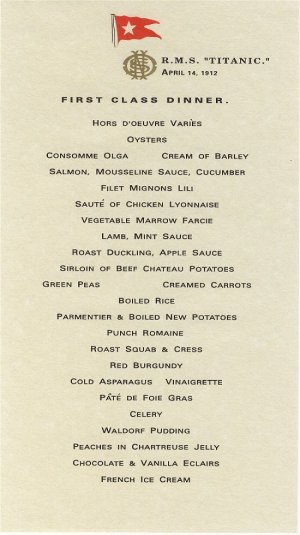 The world’s greatest ever chef and restaurateur team Escoffier and César Ritz, both consulted on the menu and service for the Titanic. The food was certainly indulgent in richness and quantity. It was also the forefront of then modern gastronomy. So whilst totally different in style to Heston,  René and Ferran, the sentiment of enjoyment and celebration perhaps remains the same.

The Titanic story continues to captivate people and I came across a Canadian cook who is passionate enough to put together the recepies for all of the menu of the 1st class dinner on that final night. Take a look here:

For a State Banquet in 1899, The Emperor and Empress of Germany came to visit Queen Victoria at Winsor Castle.

As the menu below shows, these were seriously indulgent feasts of 6,7,8 or more courses. There are no fewer than seventeen dishes being served on the menu.

Queen Victoria could be pretty narky and for some reason insisted on all windows being open during a dinner. Her famous ‘we are not amused’ line came about when someone told her a j o k e at the dinner table. Jeez.

The menus from Victoria’s State Banquet time were written in French which is still the custom today.

As a contrast, take a peak at the

Christmas menu from The Fat Duck 2012. 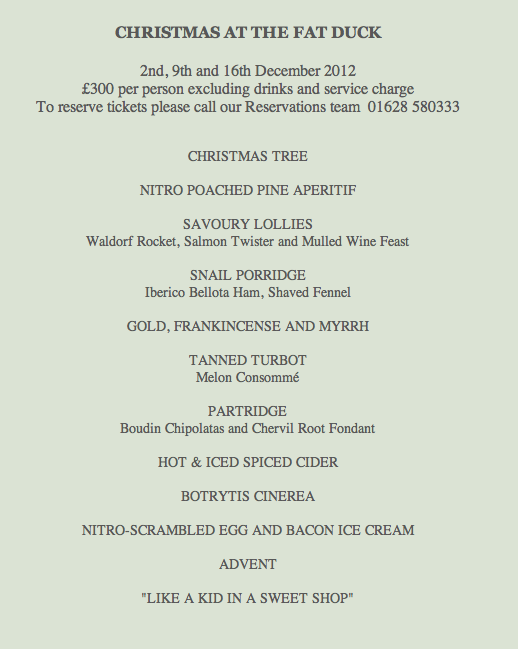 Kid in a sweet shop indeed.

Most of the chefs died on the Titanic but there is one well known story of a chef, Charles Joughin, who survived in an extraordinary way.

During the sinking of the ship Joughin and the other chefs brought food to the lifeboats. Joughin stayed on board right until the very end, drinking whiskey. After everyone else was in the water he straddled the Starboard rail as the ship sunk ever deeper. Right at the very last moment, just before the ship went under, he jumped off without his head even going under water. Charles Joughin had drunk ‘just the right amount’ of whiskey so that that the alcohol in his blood meant he survived longer. He was eventually picked up over two  hours later! He survived and lived till 78.

3 thoughts on “Food for Thought: The Titanic to Queen Victoria”