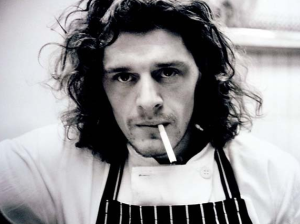 Perhaps the most enigmatic chef of modern times is Marco Pierre White. He is the first bona fide ‘celebrity chef’ from the UK, rising to prominence in an age that preceded reality television. It was his extraordinary skill as a chef and cut-throat, domineering personality that made him such a fascinating public figure. He can also be credited as someone who brought romance and a touch of cool to what had previously been seen as an unglamorous career choice. Like McCartney (but probably more Richards) he has inspired thousands to do what he did.

“He is one of the few people I can remember the exact moment of meeting. I walked in to his first restaurant, Harvey’s, on Wandsworth Common. I was wearing a tail coat and sponge-bag trousers. He was wearing a butcher’s apron and the look of a serial killer. I was on my way to a wedding, he was on his way to greatness.”

Now a brand ambassador and very successful restaurateur, he was first and most importantly, a chef. No ordinary chef either. He ran the seminal and legendary restaurant Harveys on Wandsworth Common (now Chez Bruce) and was the youngest British chef to ever win three Michelin stars (Hyde Park Hotel – Now Mandarin Oriental).

Marco trained under the biggest names in the restaurant world including Albert and Michel Roux at Le Gavroche, Pierre Koffman at La Tante Claire, Raymond Blanc at Le Manoir aux Quat Saisons and Nico Ladenis. He also mentored Gordon Ramsay (who credits him as having the biggest influence on his career), Heston Blumenthal, Bryn Williams (Odette’s) and Mario Batali.

In the early nineties, there wasn’t today’s level of public interest in restaurants and chefs. Nonetheless, Harveys was famous in its own right due to its exceptional standards. Many knew of Harvey’s due to the press’s love affair with the character that was Marco. Throwing bankers and celebrities out added to the compelling rock and roll star image that was cultivated.

Marco always had his reasons of course:

‘There was always a reason. I was trying to create something special, and they were trying to spoil it. My pet hate, with customers, is those that think it’s all about wallets. You get four silly boys, spoiling it for some guy with his wife at the next table, so you ask them to behave, and they take the attitude: bugger you, we’ve spent a lot of money. Well, bugger them. They’re missing the point totally. Usually it’s City boys, these expense-account types who know nothing about food. Yes, I threw 54 of them out one night. It was an engagement party, but they were far too rowdy. They were dropping cigarette butts on the floor, for Christ’s sake.’

Famously, when a customer once ordered a side order of chips he hand cut and cooked them personally, but charged £25 for the privilege.

‘Well, yes, that’s true, a one-off. But this guy was just trying to show off in front of his City boys – there were no chips on the menu, but he asked for some. Fine. So I spent a long careful time on them – hand-cut, blanched, lovingly fried, served up with a little silver plate of sauce. An hour of my time. £25. He hadn’t thought to ask the price.’

This wonderful clip gives an insight into the man at 27 years old. It’s interesting how incredibly self analytical he is as men often are at this time. The intense pressure of running his own restaurant, coupled with his own self imposed levels of perfection, all geared towards the holy grail of winning Michelin stars, is obvious to see.

He’s described his 20s as being the most unhappy of his life, though they were the time he was at his most successful as a chef.
You can spot a spotty 22 year old Ramsay in the kitchen with him at the end. Gordon Ramsey was Marco’s protégé at Harvey’s. As often with protégées Marco saved some of the biggest bollockings for him. He recounts:

As Gordon now admits, this helped make him the chef he became, not just in craft but also in man management skills. Marco and Gordon remained good friends after Harvey’s, until Gordon brought a film crew to Marco’s wedding to which he objected. They haven’t made up since, although they both frequently speak about the respect they have for each other work.

“I just want him to be the Marco that he was when I met him – when I was 19 and he was 25 and I got my fucking arse kicked and I got the shit beaten out of me but I loved every minute of it.”

Many years later they ran into each other at Heston Blumenthal’s Fat Duck.

‘Gordon came into the garden and said, ‘Thank you very much Marco for ruining a nice day.’

“I said, ‘Why don’t you sue me for loss of enjoyment?’ He came back with, ‘You fat bastard. I’ve always wanted to call you that.’ I said, ‘Is that the best you can do?’ Gordon left. There was silence in the garden.”

Much like two boxers promoting their fight both men have benefited from raised profiles. The intensified public interest has meant millions of books and dinners have been sold from the back of this.

Marco Pierre isn’t French as often assumed. He was born in Yorkshire with English and Italian parents. Like many chefs he came from a poor background but developed a ferocious work ethic and his levels of perfectionism were a testament to such. After winning his second star at Harvey’s, he left to go to the Hyde Park Hotel as chef-patron of The Restaurant Marco Pierre White and won his third star. He was the youngest British chef ever to do so. Only Gordon Ramsey and Heston Blumenthal have achieved the same feat since.

“Marco is the best chef I have ever come across. It’s invidious to make these judgments, but in a critic’s life they’re inevitable. He wasn’t necessarily the most technically adept, and he didn’t have the keenest palate or the most inventive mind, but he did have all those things in the top 10%, plus that obsessive enthusiasm” 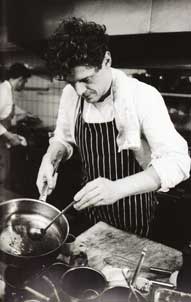 Marco retired as a chef in 1999, cooking his final meal at the Oak Room and handed his stars back to Michelin. He has always said that he was fed up of being judged by people who had less knowledge than him. His legacy is immense, he presides over 20 restaurants, and makes many TV appearances. For many though he’ll always be remembered as the best, most exciting and dangerous chef they’ve ever seen.

“Well… I wasn’t manufactured. I was cut from the cloth of the very old world of gastronomy. There was no such thing as celebrity chefs. Chefs were trained and I like to think that I still represent those old values from that world and the opportunities that I am offered I often say no to. I’m not really that interested.”

“The day Marco stopped cooking was one of my stomach’s saddest.”