Last week Eminem’s acerbic verbal assault on the Tango-faced, fat president of The United States was widely endorsed by the media, Hollywood, blacks and whites. It restored some trust in celebrity culture and the power it can sometimes do for good. 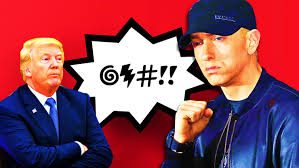 Trump-bashing is common. So why did Eminem’s excoriation of Donald’s Red, White and Blue strike a collective chord? His freestyle calls out his own fans and disowns those who follow Trump. This isn’t what an artist is supposed to do. The result? He’s unambiguous. We trust him.

Yes, this is a white guy talking about mostly black issues. But we know he was raised in a black neighbourhood, that his closest friends and contemporaries are black and that his love for the culture is defining. The dots join up. So, again, we trust him.

But still, why is this white guy the important interlocutor? Why not Jay Z? Because he’s not just preaching to the converted. He has a huge white following; many Trump supporters and plenty of fence sitters. He’s the swing rapper. His verses are accretive, lamenting lame distractions and rally against a ‘democracy of hypocrisy’. Moreover, he doesn’t dumb it down. We might find him offensive. But we trust him.

Eminem also raps about spitting on your onion rings, Doritos, Cheetos and Valium sandwiches. So, I wouldn’t trust him with restaurant advice. And due to the millions of readers A Lot Of Chop enjoys, I get asked, almost hourly, for suggestions. We all have our lanes. 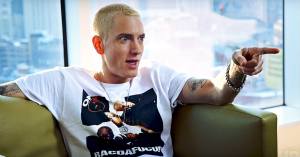 A recommendation is your reputation on the line. There are only a handful of restaurants I trust, knowing they deliver every time. They are; Tayyabs, Brawn and The Hawksmoor.

The Hawksmoor was founded by Will Beckett and Huw Gott in 2006. Their quest was to be the greatest bovine restaurant in London. An Aberdeen Angus antithesis. 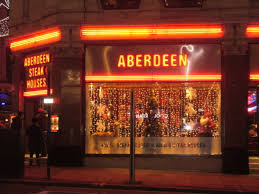 It started with a meaty pilgrimage to find the best supplier, covering every corner of the UK with a toothcomb. Their journey would eventually lead them to Yorkshire and the eugenic longhorn cattlebred, bred and butchered by the Ginger Pig. It still supplies them today.

Make no mistake, The Hawksmoor is all about the beef. Chateaubriand, Porterhouse, T-bone, Bone-in Prime Rib, Filet, Rib-Eye, Sirloin and Rump steaks are seared on Turkish Josper charcoal grills. They are smoky black-on the outside and sweet, pink and perfect inside. Which is as dirty as it sounds. 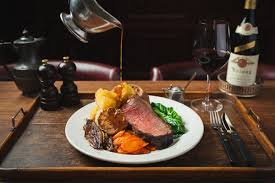 It’s very difficult to describe how it all tastes without needing an ice-cold shower. I’ve never had anything I didn’t enjoy there. My friend Josh goes most weeks and only dislikes their tomato sauce.

Like a perfect partner The Hawkmoor is sensual, tasty and fun; their Ferrero Rocher pudding, Gregg’s inspired Steak Slice and Big Mac are cheeky winks to the low-end. McDonalds and The Hawksmoor are polar opposites in most areas but they have more in common than meats the eye. A Filet-o-Fish or Quarter Pounder with Cheese taste exactly how they did the first time you ever tasted them. This psychological effect hooks us nostalgically to our past. We go back to these places for comfort. The Hawksmoor is a Chesterfield sofa and the Cheers theme tune.

We don’t go to the The Hawksmoor because it’s new or creative or salutary. We go because we trust in their knockout, Shangri La food. And it’s the same, just as good, every single time we go.