Anthony Bourdain was raw, brilliant and inspiring. He was adored. His death has seen an outpouring of public sadness usually reserved for music stars. Like many gone too soon, his work and spirit touched people more than they and perhaps he realised.

Born in New York City 1956, his Catholic father was an executive for Columbia Records and his Jewish mother, an editor at the New York Times. Early trips to France aroused a love of adventurous food. He was delighted to see his parents’ shock as he swallowed his first oyster straight from the sea.

“I’ve long believed that good food, good eating, is all about risk. Whether we’re talking about unpasteurized Stilton, raw oysters or working for organized crime ‘associates,’ food, for me, has always been an adventure”

Lanky and louche, the teenage Bourdain looked most destined to be in a punk band. Curtis Mayfield, The Heart Breakers and The Brian Jonestown Massacre formed the soundtrack of his teenage years. But it was in the restaurant kitchens of New York that he would find his rock’n’roll calling.

He started as a pot-washer in Flagship and witnessed his head chef having sex with a customer in the car park. That customer just so happened to be a bride. He would later write: “I knew then, dear reader, for the first time: I wanted to be a chef.”

Bourdain ‘whored himself out’ to restaurants all over town; Chuck Howard’s, Nikki & Kelly and Gianni’s. He wasn’t a great chef but he was hugely popular, organised and a charismatic leader. He amassed a group of disciple-like commis, cleaners and dealers who followed him from restaurant to restaurant, whilst he navigated, pirate like. Pissed.

Bourdain ‘wanted’ to become a drug taker and cocaine was rife in the kitchens. A devout Williams Burroughs fan, he viewed heroin romantically. He burrowed deep down a golden-brown rabbit hole, channelling his inner Iggy Pop, before eventually kicking the habit. They were tightrope years. 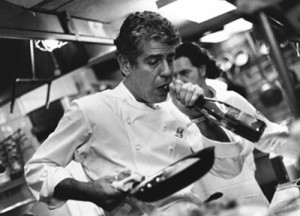 After a bruising and failed attempt to run his own restaurant, Bourdain began to consider becoming a ‘traitor to his profession’. He was 44, executive chef at Les Halles brasserie and unable to pay his rent or taxes.

Always a voracious reader, Bourdain could write too. Brilliantly. He penned a candid ‘reveal all’ piece on the secrets of restaurants which somehow found its way to the New Yorker. His irreverent, gonzo style and snarky sense of humour catapulted him to a new world. His first book was commissioned as an extension of this piece.  ‘Kitchen Confidential’ was a smash hit.

Kitchen Confidential – Adventures in the Culinary Underbelly was Fear and Loathing in the kitchens of New York. It revolutionised the entire genre of food writing. His truths were stranger than fiction. It’s a still a compulsive read today; He’s a funny, smart, hot-dawg-Yankee:

“In America, the professional kitchen is the last refuge of the misfit. It’s a place for people with bad pasts to find a new family. It’s a haven for foreigners—Ecuadorians, Mexicans, Chinese, Senegalese, Egyptians, Poles. In New York, the main linguistic spice is Spanish. “Hey, maricón! chupa mis huevos” means, roughly, “How are you, valued comrade? I hope all is well.” And you hear “Hey, baboso! Put some more brown jiz on the fire and check your meez before the sous comes back there and fucks you in the culo!,” which means “Please reduce some additional demi-glace, brother, and reëxamine your mise en place, because the sous-chef is concerned about your state of readiness.”

In 2002 he made his TV debut with ‘A Cook’s Tour’ followed by ‘No Reservations’ ‘Parts Unknown’ and ‘The Layover’. Each of these shows would revolve around Borudain in far and further flung corners of the world. The peripatetic cook (that we all wanted to be) was born.

Throughout Bourdain’s TV shows, the food serves as a window into the cities’ cultural living rooms. Bourdain eats everything, everywhere with everyone; authentically and exotically. But it’s never a gimmick. This was how he was wired.

But more than the countries, it’s the people he’s interested in. He dines with locals in cafes, pubs, boats and beaches – ice-breaking himself into revealing conversations about their lives, challenges, beliefs and truths. 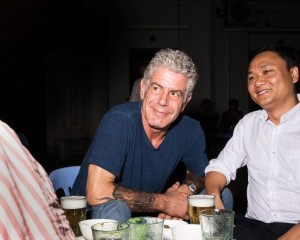 Bourdain’s work became anthropologic. His sensibility allowed us to see, as humans, we’re not as different as we’re often encouraged to believe. He sought transparency rather than a filtered lens. He wasn’t overly political or preachy but he wanted the West to see that an abundance of food (on which most shows are premised) is unfamiliar in most parts of the world.

I recently watched an episode where Anthony goes out drinking with his colleagues in New York. He’s not exactly mobbed but everyone recognises him. Some fans are kind and polite, others are intrusive and entitled. This insight into a flip-side world of fame shows pressures one can’t appreciate until they’re there.

He will live on through his work, his sentiments and his soul. Big love Anthony. They broke the mould with you.

“I wanted adventures. I wanted to go up the Nung river to the heart of darkness in Cambodia. I wanted to ride out into a desert on camelback, sand and dunes in every direction, eat whole roasted lamb with my fingers. I wanted to kick snow off my boots in a Mafiya nightclub in Russia. I wanted to play with automatic weapons in Phnom Penh, recapture the past in a small oyster village in France, step into a seedy neon-lit pulqueria in rural Mexico. I wanted to run roadblocks in the middle of the night, blowing past angry militia with a handful of hurled Marlboro packs, experience fear, excitement, wonder. I wanted kicks – the kind of melodramatic thrills and chills I’d yearned for since childhood, the kind of adventure I’d found as a little boy in the pages of my Tintin comic books. I wanted to see the world – and I wanted the world to be just like the movies”